“I was honored to work with some of the best talent in the world. I learned from them” Michael A MacRae

Michael A MacRae directed and co-wrote Fishbowl California, a hilarious comedy about 20-something slacker Rodney (Steve Olson) who ends up living with June (Katherine Cortez), a bolshy, beer-loving widow, after she catches him stealing her electricity. Check out my Q&A with Michael below, read my 4-star review of the film and my interview with lead actor Steve Olson.

Director Michael A MacRae, who shot the movie in 15 days

1. First of all, why the title Fishbowl California? I did wonder if it was a pun on a place name, but I’ve googled – yes really – and can’t find anywhere called Fishbowl in California. There is a Fishpond Bottom in Dorset (South East England), though.

That’s some dedication! Actually, we circled our heads around a few different titles. The more recent one was just Fishbowl thematically playing with Rodney’s existence stuck in a fishbowl, per se. There were many titles with that exact name, so we were playing with Fishbowl in a phrase and one of the writers blurted out California, (as a nod to Hotel California) and it just stuck! The rest is history!

2. Did you (or the other writers) base Rodney and June on anyone you know? And if so have you told them?

A few people who know me well said that Rodney emulates me to some degree — but that wasn’t the intention. I guess that happens naturally as you write.

For the role of June, however, I wanted a Jane Fonda-esque type, a real tough as nails, no-nonsense woman. I think we nailed it.

3. It struck me that though we find out almost in a throwaway line that Rodney has had a tough start in life (I’m assuming he’s telling the truth here), he never uses that fact to gain sympathy. Was that deliberate when you were crafting the character?

Every actor and writer creates a backstory for their characters. The backstory has to be kept in mind during production so we stay true with the choices we make as creators. Rodney’s shows he’s really down on his luck, I don’t think we need to say it in words, ya know? The sympathy came naturally for him. 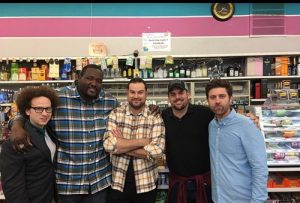 4. I thought your whole cast was terrific – almost an embarrassment of riches. I kept wanting Rodney and June to run out of milk so they had to go back to Chad’s convenience store. Kate Flannery was also superb when her character Susan interviewed Rodney for a job. And poor old Woody, June’s neighbour. Oh and the pilot! Were you able to go out and get the cast you wanted, or was it a happy accident?

When casting, we had our “dream cast” and our “reality cast” (being the ones we could and could not afford). I was so thrilled we were able to get everyone we wanted in the film.

It was a lot of work hashing out agreements and contracts, but we did it. I was honored to work with some of the best talent in the world. I learned from them.

5. How did you get Fishbowl California off the ground? Did it take ages or has it all been a bit of a whirlwind?

We spent almost a year writing it. I think we made five full revisions. It was shot in 15 days, and edited over the course of seven months. We distributed it nearly exactly a year after we shot. I’d say the turnaround time wasn’t too shabby! It would not be possible without the team I had to work with. They’re the true rockstars. 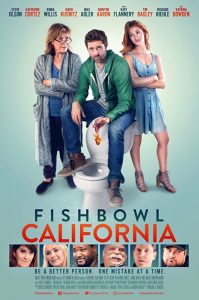 6. Do you think everyone has a bit of Rodney in them? When he turns up with what looks like a bottle of booze attached to the balloon I was cringing – in a good way – as it’s the kind of thing I would do, along with making the subsequent speech 50% about me.

Absolutely. We all have a side in us that means well but we still sometimes screw it up. It happens. That booze to the balloon bit wasn’t actually scripted. The balloon was a gift to me on set (with Swedish Fish — ha!)

7. I loved how the characters are antagonistic, laid back, bemused or whatever, but they don’t overstep realistic boundaries. How hard is that to do, especially on set with your actors? To push a joke so far, but no further?

Making the entire set laugh was so fun. Steve Olson did that a lot. He literally IS Rodney! Everyone on the cast came from a very strong comedy background. With today’s social issues, we have to stay mindful about how it will be received. During one of the scenes with Katherine Cortez (June) and Tim Bagley (Woody) there was an improvised political joke.

As funny as we all laughed, we opted to cut it, to err on the side of caution.

8. What was your writing process like? Is it hard taking criticism from co- writers, or (perhaps harder!) giving tough feedback?

It’s always hard receiving tough criticism. We want to be perfect. We want to be the best. In reality, we all suck in someone’s opinion. The script was sent to a few very experienced writers for some guidance and an outside perspective. Collaboration is key to coming up with great scripts. 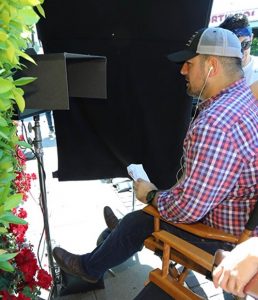 9. The more I talk to directors of independent films the more I realize how much of the work actually takes place after the film is completed: hitting the festival circuit, trying to keep your movie in people’s minds long enough for it to find its audience, etc. What are your plans for the film going forward?

We finished the festival circuit in late March 2018. Our goal now is to get the film in front of as many faces as possible. You’ll find me on Twitter harassing my idols to watch my trailer. It worked for one. His name rhymes with Mudd Japatow.

Check out my 4-star review of the film and the trailer and my interview with lead actor Steve Olson.