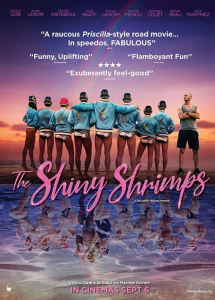 In both those films a new coach came on board to whip them into shape, in the hope that they at least wouldn’t embarrass themselves at the finals.

The Shiny Shrimps though – known as Les Crevettes Pailletées in France, where it’s been a huge hit – has a twist. Their coach is silver medal-winning swimmer Matthias Le Goff (Nicolas Gob), who used a homophobic slur against a journalist after a race. The swimming federation decides that he must spend three months training the Shiny Shrimps, and hopefully take them to glory in Croatia’s Gay Games.

This is a bawdy, vibrant and exuberant delight, all overlaying what is really a very (very!) traditional, and often contrived, comedy. They’re rude, they’re emotionally battered, and they’re here to have a ball. There aren’t any surprises but you’ll have a lot of fun being un-surprised.

Matthias has been swimming well below par for a few years; bitter at himself, but not really understanding why his remarks have caused quite the outrage they have, it’s not a great start. Some of the Shiny Shrimps too are none too happy to have him on board.

Like the men in the other two films, the Shrimps are less concerned about winning than the cameraderie, and the safe space where they can be themselves. Jean (a nuanced Alban Lenoir), a chef, set the group up as a sort of family for gay men. The irony is that now gay marriage and children are options for them, one of their number, Cedric (Michaël Abiteboul), finds himself increasingly torn between his husband and baby twins, and his commitment to the Shiny Shrimps.

The film never shies away from these tensions, but it’s always done with warmth and some great gags. Joël jokes that they can say whatever they like because of “minority privilege”, and characters aren’t afraid to use that to their advantage because despite their determination to have fun they’re well aware that homophobia still bubbles around them. At one point Cedric, having claimed he’s going on a work trip rather than Croatia, fakes a homophobic attack on their car so his husband can’t accompany him to the airport – then as they hug goodbye delivers a heartfelt shout to the neighbourhood: “can’t we be free to LOVE?”

The men, and newly-out transwoman Fred (Romain Brau) – who is never knowingly underdressed for the world’s starriest fashion gala, even if she’s only popping to the shops – are terrible at water polo, though what they get from the team has little to do with sporting endeavour. Matthias may be in it to win it, swimming endless lengths and weighing out protein shakes, but they want a respite from their other problems, not to add a new one.

The Gay Games are about being proud and, for the young ones, partying. For the older Joël (an endearingly grumpy Roland Menou) they’re more about visibility and permanence.

Initially the Shrimps shy away from real pool work, preferring to protect themselves by digging into their cliches, offering pre-match performances that don’t take the sport seriously. A pre-Games warm up match against lesbian team The Lumberjacks (“they’re animals” warns Joël ominously) threatens to leave the Shrimps defeated and outclassed.

Gob has one of the most quietly expressive faces I’ve seen for a while, as he struggles with both his own performance, his poor relationship with his daughter Victoire, and the lack of commitment to sporting excellence from the team. He doesn’t say much but his pigheadedness, anger, frustration, and self-loathing play out across his face.

Still, it’s not really about him, but about the team, and their characterisation is deft. Joël is old school and never lets anyone forget his activism from the days of Act-Up, that it’s thanks to his generation that young gay men have some of the freedoms they do. “You fork out for your arse but not the club fees!” he tells Xavier (Geoffrey Couët) as the younger man shows off his Ryan Gosling bottom tattoo.

Cedric (looking uncannily like Seth Rogen) feels himself constantly pulled in two directions. Fred, now finally happy with her body and her life, knows the world still doesn’t fully accept her. Young Vincent (Félix Martinez) has only just come out, delighted to be part of the Shrimps but taking baby steps around gay culture. Jean’s ex-boyfriend Alex remains lovelorn. And Jean himself claims the cancer he faced the previous year is in remission, while secretly guzzling painkillers like sweets.

Their trip to the Gay Games is via an open-topped bus, trundling through European villages with rest and training stops along the way. They chat, sing Sabrina’s Boys Boys Boys, dress up as Celine Dion, strip off when they should be practising (“we’re training, put your dicks away!” poor Matthias yells), and track hot local men on Grindr, though real life intrudes with a reminder that laws alone don’t end bigotry.

Directors Maxime Govare and Cédric Le Gallo dig into witty tropes while highlighting the sometimes difficult changes the Shrimps are facing: thanks to that warm and humane characterisation, a script that fizzes with joi-de-vivre, and performances that layer out-and-proud bounciness with shades of pain.

They also understand – and I think this is key – the tensions that emerge in previously cohesive groups as battles start to be won, something that’s often glossed over. Some of these are age-related (I do think some tension between generations is useful and can make us all reflect on everyone’s contributions) but not all.

Jean is still their leader, and it’s touching how these jostling characters defer to him. Heading into a gay club the night before a big match, he announces “SHRIMPS DISPERSE!”. Meanwhile Joël mutters about seeing everyone at the door in an hour.

The ending is bittersweet and fitting – entirely expected, lacking a little finesse, but driven by heart – and sure to make you want to release your inner, sporting legend diva.

Watch the trailer for The Shiny Shrimps and scroll down for images from the film: