You are here: Home / Film Reviews / The Dead Don’t Die 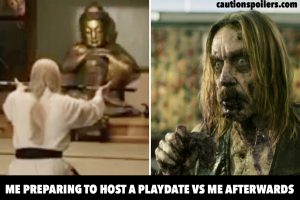 The Dead Don’t Die is allegory with the occasional big dose of very pleasing karma thrown in, along with some intestines.

And a lot of dry humour, as otherworldly yet Scottish undertaker Zelda (Tilda Swinton), making up two dead golfers with day-glow eye make up, spits out an accusatory “are you in this together?” at the newly-moving bodies before lopping off their heads with a sword.

Not everyone is prepared for the apocalypse, but Centerville, “A Really Nice Place” as its sign points out, has both the self-possessed, sword-wielding Zelda, and local cop Ronnie (Adam Driver). He’s laconic, matter of fact and rather doomy, but also realises when the first intestine-less victims are discovered that this is probably zombies.

Also on the ball, End Times-wise, are the town misfits: Hermit Bob (Tom Waits) who lives in the woods and picks up on all the signs of growing weirdness; three kids in the local correctional facility; and 20-something nerd Bobby, who is obsessed with sci fi and fantasy.

Centerville’s current (living) population is 738 according to that painted town sign, which is bad planning, considering what’s approaching. Soon they’ll realise they’d be better off with those flippy manual numbers they used to use for scoring cricket matches.

Once the dead begin to rise from their graves, they gravitate to what they used to do and where they used to go. Coffee. Baseball. Chardonnay. And if you’re from over here, Greggs presumably, though Dead-You might find their new vegan sausage rolls the ultimate evidence of a world gone mad.

They do eat the living though their strength comes from force of numbers rather than skill. At one point a crowd of them surround Cliff and Ronnie’s squad car, grey-faced, straggly haired moaners, unsure what to do beyond pushing their faces up to the glass while groaning in bewilderment, not unlike me when I’ve lost my car keys.

Jim Jarmusch’s zomcom is ostensibly about the evils of capitalism, and what it’s doing to the planet. Fracking, particularly at the poles, has caused the planet to tip off its axis, which in turn is making weird stuff happen.

The days are now way too short or way too long, and animals are going crazy, to a soundtrack of The Dead Don’t Die by Sturgill Simpson on the radio (“It’s the theme song” says the all-knowing Ronnie, before the dead have even risen). Politicians glibly brush off the dangers; news programmes try to spin this weirdness into normality (people are “gathering in cemeteries then dispersing”, one reports).

But The Dead Don’t Die also goes full-on in its meta appraisal of Hollywood. Here are the good guys, Ronnie and Cliff. And even if they’ve both kept their humanity and know how to play the game, it isn’t going to end well – that’s not even a spoiler, as Ronnie says it all the time. He’s read the script all the way though, unlike poor Chief Cliff Robertson (Bill Murray). Their colleague Minerva (Chloe Sivigny) can’t cope at all with what’s happening to her dead loved ones.

And here’s Zelda Winston/Tilda Swinton, an alien in Hollywood (trust me on that one!), who manages to bestride its madness while making it bend to her will, before leaving again. Even on the red carpet she’s beautiful and fashion-forward, yet I’m guessing she’s never starved herself into an outfit and gone without water for 24 hours before hand.

Meanwhile Hollywood teens (women and men) are eaten and spat out – if they’re lucky they don’t turn into monsters replicating the system they still have no control over.

The Dead Don’t Die is very slow-moving, like its zombies, who still end up taking over even though they don’t have that much in terms of skills.

Not so much a slow burn as a strange singe, I found it all so mesmerising that it was only later I realised (admitted?) that there’s almost no characterisation or back story, and it never digs below the surface (even the zombies haven’t been buried very deep in the cemetery).

The first half meanders entertainingly as we wait for something to happen, setting out clearly who are decent, who are evil and who are just plain odd. Oh and there’s some increasingly did-I-just-hear-that fourth wall-breaking from Ronnie and Cliff, but only in the police car.

The acting is deliberate and stagy, and there’s no real plot beyond strange news reports, and zombies. It’s been stripped back so much any thought of subtlety and interlocking story is gone.

And yet, and yet, I still really enjoyed its dry-drawled wit and quirkiness. It isn’t remotely frightening, and the most disgusting bit is when someone who isn’t even dead yet eats cat food. It doesn’t have a real ending, and the zombies have nothing interesting about them that other movie zombies don’t have.

Jarmusch doesn’t even seem that bothered over what type of zombies they are. Sometimes a zombie recognises a living person, but not much. Despite their rotting outfits from different periods, body-wise they’re in pretty good nick. The (very funny) idea that they return to the places they were most attached to (coffee shops, baseball pitches) is also barely touched on.

I can imagine this becoming a student favourite, lines replayed over and over through a haze of smoke and surrounded by half eaten Pringles, forfeits involving saying “GHOULS!” before swigging from a bottle of Thunderbird.

Even with its blunt style and allegories it could still have gone further looking into the ideas (and characters) it sets up. We follow a trio of kids from the nearly detention centre, then they disappear (is that meant to mimic real life, that we cease to care once they’re out of sight? I don’t know but it was frustrating).

The Dead Don’t Die has a terrific A-list cast (Selena Gomez, Steve Buscemi, Danny Glover, Iggy Pop as Coffee Zombie), all of whom look as if they’re having great fun, even as their characters are being eaten by deceased family members. It would have been good if there had been a little more for them to get their teeth into, but while it’s as directionless as its staggering, moaning zombies, it’s still, as we say up North, dead good.

Watch the trailer for The Dead Don’t Die and scroll down for film clips: