You are here: Home / Film Reviews / Reviews By Kids / The Witches (kids’ review!) 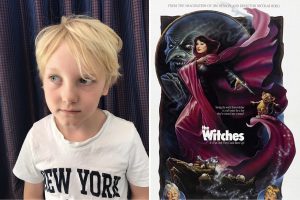 The witches in this film have horrible toes so they have to wear horrible shoes and they are bald with purple eyes.

I like this film a lot because it investigates the witches and stops them turning children into mice. I liked the drama in it, it’s quite exciting.

Luke stays with his grandma (Man Zetterling) who lives in Norway and she tells him about witches and that they are real. When she was little her friend Erica was kidnapped by a witch and was stuck in a painting for ever until she died. So she knows that witches are real.

Then his mum and dad die and he goes with his grandma to live in England. He meets a real witch when he is up a tree but knows she is one and shouts for his grandma.

They go on holiday to a hotel because his grandma has diabetes and the doctor says she’ll be good as new afterwards. The manager of the hotel is the same man who plays Johnny English the spy but this film is from a long time ago.

Luke (Jasen Fisher) finds out that witches are having a big meeting there. Their leader is called the Grand High Witch (Anjelica Huston). She has black hair and red lips and is very beautiful until you see what she’s really like which is bald and old.

I have watched The Witches a lot. The first time I saw the Grand High Witch peel off her face and she’s all yucky underneath I thought “wow she is ugly”. Then she fires her x-ray eyes at a witch and turns the other witch into a pile of ashes.

They have a new potion that turns children into mice and they practice on Bruno, a boy who makes friends with Luke in the hotel. The witches hate children and think they smell like dogs droppings. Luke hides in the room where the witches are but they can smell him even when he’s hiding.

Luke is turned into a mouse too and he and Bruno have to stop the witches turning all the children in England into mice. He can still speak and his grandma can hear him.

I don’t think it’s scary but little children might be scared. Also it’s creepy because the witches are really evil and they hate children all the time. They are not nice at all.

Sometimes it is funny, like when Bruno and Luke are mice and go into the kitchen to pour the potion into the witches’ soup and then one of the mice runs up the chef’s trouser leg.

My mum read the book of The Witches to my brother but not to me and she says the book is scarier than the film and at the end Luke is still a mouse. In the film he is changed back to a boy.

The woman who plays the head witch is actually a very good actress because she’s so scary and horrible.

The boy who plays Luke is good too. He is the same age as me and if I was him I would kill all the horrible witches. Job done.

buy / rent the witches from amazon.com

Watch the trailer for The Witches: