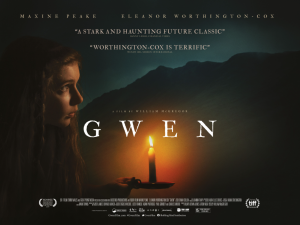 Despite its wailing winds and shrieking storms, and its central teenage girl, Gwen‘s horror is man-made: layers of threat where her family’s own weaponry (their links to the land itself) makes them targets, while being no match for their opponents’ power.

Gwen – part folktale, part psychological study, part social commentary – is an unsettling experience. What seems straightforward turns out not to be, as does 16 year old Gwen herself, growing up during the Industrial Revolution on an isolated farm in Snowdonia with her little sister Mari and mum Elen.

Gwen (played by the extraordinary Eleanor Worthington-Cox) is coping with massive upheaval in her life, with yet more threatened. Her father has gone to fight in the Crimean War and not returned; the local mining company want to take over their family farm so they can mine the land, and are increasingly aggressive in their tactics.

The little family live in isolation, in a valley that used to contain three farms but now holds only theirs. But the problem with cutting yourself off is that while it is a protection, it also marks you out as different, and lessens ties with other locals.

Writer-director William McGregor has spoken about his own childhood growing up on an isolated Norfolk farm, and he clearly knows how to maximise the influence of isolation, and that of an unchanging and dramatic landscape.

Having the family all-female gives their predicament an extra dimension though, beyond things that go bump in the night. That isolation, both imposed and self-created, also highlights the age-old fear men hold about women who understand and are close to the land. The witchy, midwifey type, living on the edge of the village, a source of help and also dread, has long been someone to be othered by supposedly modern men, blamed and bullied when a scapegoat is needed.

Elen (Maxine Peake) fits the bill perfectly, her vulnerability meaning she has nothing else to fall back on. Her increasingly frequent seizures just make her more of a target

Even well, she’s taciturn and often sharp, weighed down by responsibility, trying to keep her girls safe and push back against the pressure of the mining company. Physical illness combines with the emotional pressure on her, as strange things occur that threaten them all.

Gwen thinks she hears someone outside in the middle of the night, and ventures out into the storm to look; one morning they find their small flock of sheep has been killed. Elen’s response is to summon the old ways as she smashes and scatters a sheep’s skull (though what else can she do?) Another family in the valley has died, supposedly of natural causes, but did they?

The local doctor (Kobna Holdbrook-Smith) tries to help, though even he is under pressure from the mining company, who seem to have everyone in their pockets.

It’s hard not to see parallels with stories like Gwen’s and society now. The family’s circumstances spiral downwards towards disaster, sometimes from terrible luck and sometimes because one bad thing leads to another. Even in the 21st century, the removal of safety nets means people who were previously self-sufficient, housed and working can quickly find themselves homeless and broke. Coming back is often impossible; privilege breeds privilege, and vice versa. Gwen’s tale is a common one.

It’s a starkly beautiful landscape when the weather stops raging. And the weather in Gwen is really something else; so brutal and relentless are the wind, rain, gales and snow, for a long time it’s the only soundtrack. When actual music piped up later on I was rather shocked. Sometimes the noisy weather is a humming background tune, sometimes a massive and shocking crash of from-the-gods thunder signalling some new disaster.

Thunder + flickering lamplight + a teenage girl equals jump scare and there are certainly some deliciously scary moments. Its sense of inevitable doom is hard to escape though, and reminded me of my teenage obsession with Thomas Hardy novels, which start off bad and then just get more devastating, also sometimes involving flocks of sheep meeting their demise. (Hardy too was always very good on the position of women in society.)

We know who the real monsters are: “steal a sheep and they take your hand; steal a mountain and they’ll make you a lord” says Elen bitterly near the end of the film. The pressure from the company is more vicious and weighty than that from the weather, which they can endure until it lifts.

Worthington-Cox is exceptional. She has the perfect face for a young girl becoming a woman, luminous yet increasingly knowing, learning the hard way that adults often lie (for good and bad reasons), and that she too may have secrets.

Gwen moves from open and childlike (she’s often the one playing little games with Mari) to terrified and flailing, ending up emotionally hardened (though with moments of emotional catharsis along the way).

Peake says a lot without speaking much; Elen’s desperation as she tries to protect her children while the walls close in is heartbreaking. Jodie Innes as Mari is adorable, a sweet little bundle who trudges stoically along the slate-strewn tracks, holding hands with her sister.

There’s a change of pace near the end, which stops the film simply meandering to its conclusion. The last 20 minutes bring everything to a head, sudden action among the darkness and flaming torches.

Sometimes McGregor doesn’t give us quite enough. Questions left unanswered are fine, though here I felt sometimes the lack of answers and the sketchy minor characters left the film a little too unexplained. We need a bit more to anchor ourselves.

His film is still impressively eerie though, a haunting and shocking thriller, its sense of foreboding growing from flitting shadow to solid force over the course of the film.

Gwen herself becomes a more ambiguous character, though it’s clear which are the forces (mother, mining company, landscape) that are shaping her.

Gwen is in UK cinemas now.

Read my interviews with William McGregor and Eleanor Worthington-Cox.

Watch the Gwen trailer and scroll down for images from the movie: