Goosebumps 2 is just the right length, as I wasn’t bored at all during it. My favourite character is Mr Chu who lives next door to the children in the film, because he’s cheerful and likes Halloween as much as me. 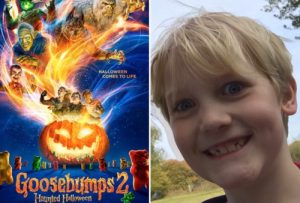 I really like the film especially the start. But the kissing is gross.

In the story, two boys called Sonny (Jeremy Ray Taylor) and Sam (Caleel Harris) discover a magic book written by RL Stine, inside a broken-down house. I liked it because of how old style the house is, it looked really creepy.

RL Stine actually wrote the Goosebumps books. The book they find brings to life a puppet called Slappy. He helps them at first by doing their chores for them, but then turns evil with his magic powers. They try to get rid of him in a lake but he comes back.

There is also a bully called Tommy Madigan (Peyton Wich) who looks like bullies often look like in stories and films. He steals the book from Sonny and Sam.

When Slappy comes alive he is really funny but pretty scary. I liked it when Slappy makes the Halloween costumes in a shop come to life too: the spinning witches with green faces look very cool for Halloween and I also liked the cyborg too. There’s also a yeti and a mummy and some other ones.

Mr Chu (Ken Jeong) makes a really cool spider out of lots of purple balloons. It is really huge and covers his whole house. He has made an amazing Halloween display in his front garden (we have a giant spinning pumpkin in our garden but I want mum to buy more things for it like Mr Chu’s). Slappy brings the big spider to life.

The only way Sonny and Sam can get everything back to normal is to get the book back from the bully and catch all the monsters Slappy has brought to life back into the book.

I’m glad the movie has the theme of Halloween as it’s my second favourite time of year after Christmas. The special effects look incredible and the whole film has a tint of scariness to it.

I haven’t watched the first Goosebumps film or read the books but now I want to because I really liked this film. I think little children and older children would all like Goosebumps.