You are here: Home / Film Reviews / From Dusk Till Dawn 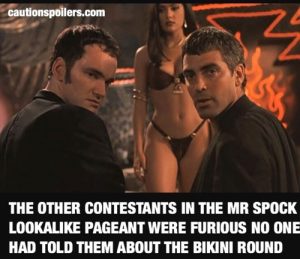 Ok so first off, grammar pedant alert, it should really be called “From Dusk Til-not-TILL Dawn”. Not as irritating as John-Wick-should-be-called-Jon-Wick-as-his-name-is-Jonathan, but mildly irritating nonetheless.

But I’ll forgive that (waits for people even more pedantic than me – hi Mum! – to tell me not to start a sentence with But) as this is such a fantastic film. I saw it when it first came out in 1996 (I was 5 at the time, obviously) and then rewatched it twice to review, and it really holds up well. They could make it today and apart from the cell phone and internet issue (so many films if remade now would be about 20 minutes long thanks to iPhones) it doesn’t seen anachronistic at all. The film really is vintage Clooney.

, or buy Blu-Ray From Dusk Till Dawn [Blu-ray]

He is just brilliant in this – he can play nasty (ok, nice-nasty) so well, his character Seth is morally very ambivalent and worlds away from Dr Ross (kids, before McDreamy in Grey’s Anatomy there was Dr Ross in ER, where gorgeous George caused so many hearts to start fluttering that if it had been set in the UK the NHS would’ve been bankrupted). Tarantino’s Ritchie is horrible, creepy and stupid with no redeeming features whatsoever. Actually, let’s just call him a rapist-murderer and have done, as that’s what he is.

It starts with a hideously violent hold up at a liquor store by trigger-happy bank robbers Seth Gecko (George Clooney) and Ritchie Gecko (Quentin Tarantino). Seth is a man who happily shoots people who get in his way but isn’t a rapist – this makes him, in comparison to his brother Ritchie, the “nice” one. The brothers are on the run after a series of bank robberies and several related murders and are aiming to cross the border into Mexico to meet up with their contact Carlos. At the liquor store, they take hostages, shoot a Ranger, and then – after several attempts – manage to shoot and burn to death the store-clerk-who-just-won’t-die.

Escaping towards the border in their car, Ritchie uses silver tape to bandage his hand which now has a big hole in it that he can see daylight though. Stopping at a motel, the brothers follow their own story via TV reports (“they going to catch us in 48 hours” says Ritchie to Seth after being asked what he’s seen on the news), where the reporters seem as excited as Ritchie by what’s gone down, running a sort of real-time murder scoreboard of Rangers, bank workers and the public.

Meanwhile, Jacob Fuller (Harvey Keitel) is travelling in a motorhome with his two teenage children, Scott and Kate (Juliette Lewis). They stop at the motel but are kidnapped by the brothers who force them to smuggle them across the border into Mexico. If they are successful the Fullers will be set free, if not they will be shot.

The brothers are heading to a rendezvous at a hard-to-miss Mexican strip club called the Titty Twister which is open, folks, “from dusk till dawn”, to meet up with Carlos  – and they insist the family stay with them.

In a few minutes Seth and Ritchie are back to shooting people, but this time their kills don’t stay down for very long – unfortunately the strippers, including Santanico Pandemonium (Salma Hayek), and the bar staff, turn out to be vampires with Santanico deciding to make Seth her slave and footstool, and change his name to Spud. (It wouldn’t surprise me if a lot of Hollywood A listers would pay good money to be Salma Hayek’s footstool and answer to “Spud”).

Soon there’s a face-off in the bar between the few survivors and a row of topless blood-soaked vampire strippers, and I suspect it’s the only time Clooney has ever looked remotely uneasy at being approached by four 20-something sexpots with their boobs out.

Juliette Lewis is brilliant in this. The film is billed as a horror comedy and it really is funny, but I still kept expecting Seth to be a teeny, tiny bit nicer than he was. He certainly isn’t a bankrobbing murderer with a heart of gold. Harvey Keitel is really, really good as Jacob Fuller – in his own way he’s as uncompromising as Seth and regularly gives him a bollocking. He’s almost a father figure to the world’s sexiest murdering bank robber and Seth in turn becomes more protective of Jacob and his family. And by the end… Seth is almost nice.

, or buy Blu-Ray From Dusk Till Dawn [Blu-ray]