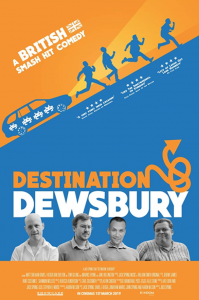 It’s a huge shock when the first one of your generation dies, as delusions of immortality crumble and the reality of middle age looms.

New indie British comedy Destination: Dewsbury tackles this from the viewpoints of four men, mates since school, their lives starting to disintegrate just as the fifth member of their schoolboy gang turns out to be dangerously ill.

The film’s sometimes gross-out humour won’t be to everybody’s taste, though that’s fine – I have two young boys so poo gags and fart jokes are my life, really.

But death, ageing and friendship are big subjects to tackle, and it’s fair to say that the end result is a mixed bag. Some good performances and a moving last act contrast with dated humour and a reliance on frenetic activity in place of a sharper script.

Peter (Matt Sheahan) is a teacher at his old school, newly dumped by his wife who informs him that he’s leaving her and has kindly even done his packing for him. Gaz (Dan Shelton) is frankly a bit dim. Smithy (Tom Gilling) is overweight and has never had a girlfriend. Businessman Adam (David J Keogh) is so stressed every sentence involves at least one use of the word “fuck” and preferably a threat of some kind towards some blameless individual.

Actually Peter’s own description of his little crew, made half-way through the film, is all you need to know: “a moron, a suicidal tosser, me with my shitty arm, and a man who would probably eat the others if he went without sugar for a few hours”. (The shitty arm isn’t a metaphor.)

The only person missing is Frankie, their friend from their school days. One of those teens who managed to be both effortlessly cool and a genuinely good friend, Frankie later moved up north to Dewsbury. They’ve all kept in touch intermittently. Doesn’t everyone think they’ll get round to visiting an old friend next year?

But now life is starting to fracture for all four men, either suddenly (Peter with his collapsing marriage) or slowly as they realise that not only have they failed at what society thinks men should be, but also that they’ve lost sight of what matters.

And then Richard (Maurice Byrne), Frankie’s father, turns up in Peter’s classroom and tells him his son is dying and wants to see his four friends one last time.

Time features heavily in this film about ageing men trying to rediscover the boys they used to be. Peter thinks it’s a few months since he last phoned Frankie but it turns out to be two years. Now time is of the essence as they travel north by coach and car to get to Frankie before he dies.

It’s a disaster of a journey for them though, made worse by two Russian gangsters in pursuit of Adam – and by extension his three friends too.

Let’s face it, most films still have male protagonists, but it’s still welcome to find a movie that looks at the kinds of issues men traditionally find it hard to talk about. And if that involves a shitty arm, let’s do it. Destination: Dewsbury touches on themes of depression, suicide, health, infidelity and marriage breakdown. And it reaffirms the value of friendship, even among disparate people, because of what they’ve been through together – in childhood and now. Doing that without making people switch off is a tall order and director Jack Spring, who is only in his early twenties, gives it a good go.

Unfortunately though much of the humour in the dialogue is very dated (race, homosexuality, weight, and teachers sleeping with pupils are all relied on for laughs).

The sections that work best are the ones not relying on forced scenarios or gags. The last half-hour is considerably better than the first hour, as the four men find themselves with one last unexpected and illegal task to undertake. The dialogue here is genuine and the interplay between the four men feels real (and still finds room for some decent one liners).

David J Keogh is excellent as Adam, who despite his swearing and aggression comes across as a sympathetic character. Adam has, in some ways, the greatest emotional journey to go on, and Keogh handles it really well. There are a couple of times when a scene he’s central to is pushed too far, but those are few and far between.

Richard (Frankie’s dad), is terrific, particularly in his first conversation with the adult Peter – his message from Frankie is heartbreakingly sad but Peter’s reactions are comedic. It’s a hard line to tread and Byrne does so with skill. Matt Sheahan’s Peter is an engaging narrator, though his material could be sharper – he has to rely too much on emphasis in his delivery rather than the scripted jokes.

I also liked Jane Hollington as Doris. She’s the middle-aged madam in charge of Nip Slip, a brothel that’s only half-masquerading as a B&B, where the four end up spending a night. She imbues Doris with warmth and laughs, and it makes a change to see an older woman loving her sexuality (and sex) without being a figure of fun to other people.

The Russian gangsters do add something to the plot, and are violent enough to feel realistic without turning this into a movie that’s gross-out for entirely different reasons. The fight scene is also well done (something that often falls down, pardon the pun, with low budget films).

It may sound paradoxical but I think it’s harder to make a really good low budget British independent film if it’s the kind of script that could be set anywhere, which, despite its title, Destination: Dewsbury is. It means the writing has to be pin-sharp and the acting top notch at all times. What I’m increasingly seeing is that low/micro budget British films that make really good use of this country’s very different, and differently evocative, locations (Dogged and Burning Men are good examples of this), give their directors a head start.

According to Wikipedia, Spring made his movie for £150,000. That’s a low budget, and to be fair he’s achieved a good deal. It just needed a funnier, tighter script.

Destination: Dewsbury is released in Showcase Cinemas in the UK from 1st March 2019. Despite my review (!), If you think it’s a film that would appeal to you please try to see it and support independent British filmmaking. For more information, go to https://www.destinationdewsbury.com/

Watch the trailer for Destination: Dewsbury and scroll down for images from the film:

Destination: Dewsbury – stills from the movie