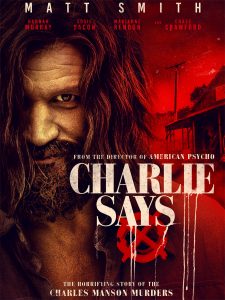 Charlie says a lot in this film, most of it absolute rubbish.

Mary Harron’s movie isn’t about Charles Manson though, but about three women, Leslie Van Houten, Patricia Krenwinkel and Susan Atkins, imprisoned for horrific murders committed at his behest: their reactions to him, and to each other.

There’s almost a love triangle going on between two of them and Charlie, with Patricia (Sosie Bacon) infatuated with Manson, and Leslie (Hannah Murray) captivated by Patricia.

Charlie Says is mostly from Leslie’s point of view, and she treats Manson as someone to be endured so she can experience the Family with her new best friend.

Still, all three truly trusted him, and they still do when we meet them – after three years incarcerated, and away from his direct influence.

With the wide eyes and rapt expressions of the true believer, they all still speak of him in hushed and girlish tones. These grown women seem stunned when their prison teacher Karlene Faith (Merritt Wever) points out that despite what Charlie said, they couldn’t actually have become winged elves after Manson’s predicted race war.

We see (and hear!) Charlie in flashbacks to a time Patricia refers to as “BC – before crimes”, and Harron nails that late ’60s vibe: sunshine and free love that has reached its zenith and is now twisted as traditional power structures reassert themselves. Charlie’s methods are the same old, same old – white men who feel neglected trying to assert their authority on the less privileged, only with beards, guitars and cheesecloth tops instead of suits and clipped hair.

It’s the twisting that lulls us out of our torpor in this sunny, druggy 1960s California: when Mary (Suki Waterhouse) has her baby at the ranch, it’s like a traditional birth surrounded by women, urging her on – but hey there’s Charlie, performing an episiotomy with a knife.

The film feels small scale and local for a story about murders that still shock 50 years on, though while this intimacy means that we are encouraged to sympathise with (and even empathise with) the girls, there’s not enough on what drove them to do it. I’m still not sure if Charlie Says is simply reporting Manson’s own lack of depth and intellectual curiosity, in everything from music to messianism; or how much the film itself is guilty of the same.

Harron portrays the Manson Family commune at Spahn’s ranch (previously an actual film and TV set for Westerns) as small and self-enclosed because it had to be (though this isolated focus also means we don’t find out how this Family fits into what was happening more widely). The commune looks weak and fragile, based on the easily-shattered teachings of a weak and fragile man who has no influence beyond these few young women and even fewer young men.

He likens himself to Jesus, while promoting racist ideologies and setting up a distinctly unradical patriarchal system where women can only eat after the men, and must have sex with whomever Charlie decrees. Everyone is supposed to get rid of their ego, apart from him.

Matt Smith is lazily good (in a good way!) Weak men are frightening because of their sense of entitlement, combined with rage that their status does not match their perception of themselves. His Charlie seethes at the lack of respect the world bestows on him yet is easily undermined and overwhelmed by stronger men.

Smith is weasily and grandiose, a small fish in an even smaller pond. He wields Manson’s plain sight methods with blunt force: removing clocks and watches to disorientate his followers, not allowing the women to handle money, making clear that new recruits are even more welcome if they have a car.

Harron, and screenwriter Guinevere Turner (who herself grew up in a Family-type commune/cult with a charismatic leader, though with no murders) urge us to sympathise with Leslie, Patricia and Susan, though it’s hard to when we know so little about why they needed the Family or how and why Manson’s methods worked.

Murray is terrific though; unsure and disorientated by the ranch, in prison finally having a moment of realisation that everything she did was entirely pointless.

Wever too is excellent: sympathetic, bemused, and eventually wavering. As Karlene’s own background is revealed in tiny pieces it becomes apparent that she’s not naive, but is increasingly troubled by what she’s doing. By breaking these women she’s forcing them to face up to their horrible crimes, something her boss (Annabeth Gish) feels is the point.

It’s an interesting film, ghoulishly fascinating (though not because of the actual murders which aren’t filmed exploitatively at all) and almost matter-of-fact.

Yet Charlie Says is a frustrating journey, and much of what we find out about the man himself is as expected: patriarchy under the guise of progressiveness.

How Patricia, Leslie and Susan’s backgrounds might lead them to this place, their minds so fertile for Charlie’s ravings and instructions to murder, isn’t explored. We also never get to grips with how his methods work. They seem ramshackle and easy to spot, typical of abusive relationships, yet turning these victims into killers. Is it really simply that these damaged women are so desperate to be loved? “She’s a seeker” says Patricia approvingly when Leslie first arrives, but all she’s seeking is a place to belong.

And it could all have been so different. One newly-arrived young woman is mightily unimpressed when Manson stands up naked in an outdoor bathtub in front of her. He gives the usual spiel but she’s having none of it, commenting tellingly that her parents taught her not to accept that kind of behaviour. Charlie is clearly shaken that a woman would see through him so easily, and this, along with a failed attempt to sign with a record producer, leave his women unnerved and eager for their vision of normality to re-establish itself. The film’s final scene is simply tragic.

Charlie Says is available in the UK from Signature Entertainment on Digital HD and DVD at Amazon UK .

It’s available in the US from Amazon.com on digital download, DVD and blu-ray.

Watch the trailer for Charlie Says, and scroll down for images from the movie: