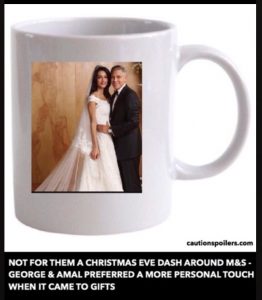 Congratulations to gorgeous George and the equally gorgeous Amal Clooney, who celebrated their 2nd wedding anniversary last week! It may not sound that impressive but superstars are like dogs, so one year of a Hollywood marriage is equal to seven of a mere mortal’s.

I googled wedding anniversary presents and apparently the modern gift for a 2nd anniversary is China! Did you buy her China George? It’s a big place so probably quite hard to wrap. Next year it’s LEATHER – so Amal, expect some kinky shit going down in September 2017.

So let’s raise our glasses (vintage champagne for them, Waitrose prosecco for us, Asti Spumante for everyone else) to George and Amal – so if you could both stop saving the world for just one minute so George could do a “From Dusk Till Dawn” sequel that would be awesome.