You are here: Home / Film News / “Drowned In Moonlight, Strangled By My Own Bra” – RIP Carrie Fisher 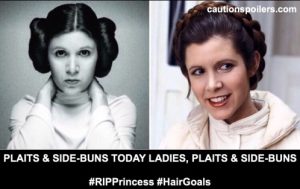 Carrie Fisher has died aged 60. Lots of people are remembering her as Princess Leia, General Organa, but she was also a hugely influential mental health activist, a successful script doctor and a brilliantly funny and insightful author.

Star Wars rather passed me by when it came out, then in the 1980s anything 70s seemed hideously unfashionable. So I didn’t see the three films until they were re-released nearly 20 years ago, where I stunned my friend as we sat in the cinema waiting for the lights to dim before Return of the Jedi by asking “what actually happens in Star Wars, I’ve never seen it.” There followed the world’s fastest New Hope exposition. (If she could have quickly written it on an opening crawl that headed into the stars, she would have done).

I then read Carrie Fisher’s books, starting with Postcards from the Edge, which I found completely hilarious and very touching. She’s one of those Hollywood stars that nearly everyone would want as their friend, or boss, or mum.

She’s also always been a huge role model for girls, and she’s needed even more now that everything for girls seems to be pink sparkling unicorns. (Nothing wrong with pink sparkly unicorns of course, or a metal bikini, as long as you’re confident you can defeat a fascist empire at the same time).

By the way the quote in the title refers to when she was told by George Lucas that show couldn’t wear a bra under her dress as in space you are weightless, so your body expands, but your bra doesn’t, and strangles you. She said she felt that “drowned in moonlight, strangled by my own bra” was the obituary she wanted for herself.