You know what, let’s think of this as My Top 10 And A Bit Movies In No Particular Order instead, as I keep remember new ones I want to add. Some of these aren’t necessarily favourites but for some reason or another they mean something to me. Feel free to add your personal faves and recommendations in the comments. 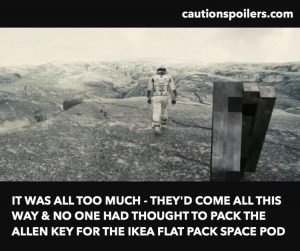 1. Interstellar
I’m always going on and on about overlong films (well if directors are happy to waste my time with dull, under-edited three hour vanity projects then I’m going to spend the same amount of time whinging about it) but one of the few exceptions to my “90 minutes and under” preference is this. It’s a brilliant mix of Sci Fi, apocalyptic disasters (as befits such a long film it is the lengthiest ever apocalypse – honestly it goes on for DECADES), love, friendship and sweetcorn. The film meanders along happily through space for what seems like several days and then goes completely weird in a bookshelf. I LOVE IT THOUGH.

I wasn’t a big Ralph Fiennes fan until this came out, he’s a great actor but he always seemed a bit… smug. This Wes Anderson film completely changed my opinion of him. As hotel concierge Gustave H, he’s hilarious – in fact its a total blast from the start until a few minutes before the end, when YOU WILL CRY. Gustave prides himself on seeing to all the needs of his guests, up to and including providing, er, a good seeing to. He takes lobby boy Zero under his wing and thew two become firm friends in this riotous comedy.

Widowed ex-hitman gets revenge on the Russian gangster’s son who killed his dog and stole his car (clue: it wan’t a 3rd-hand VW Polo given to him by his mum when he passed his test). Amazing music, dark rainy streets, sex God Keanu at his implacable best, and more heartless killing than Beatrix Potter.

4. 28 Days Later
I’m terrified of horror films but I LOVE zombies. This feels like it could really happen* especially as it is set here in the UK. The scene where the plane flies overhead and the survivors realise their whole island has been quarantined while life goes on as normal elsewhere is chilling (*ha of course it couldn’t. But when it does, I’M READY).

5. Coriolanus
Let’s face it you can lose your will to live watching a badly done Shakespeare adaptation so it was fantastic to finally find a film version of the Bard that was easy understand, in modern dress, with a modern setting (wartorn Belgrade) and with uniformly brilliant performances. Gerard Butler – sexiest Scotsman who’s ever been in a film about Sparta – is brilliant in it, better than anything I’ve seen him in (yes even Reign of Fire / 300!) God knows why there were no Oscar nominations for either the cast or Ralph Fiennes’ direction.

6. Raiders of the Lost Ark
We only got a video recorder in our family in the late 80s, and we had a rented black and white TV from Rumbelows not long before that (yes people used to rent b&w TVs!!) My sister and I recorded this off the telly and watched it a million times. It was so exciting, and so romantic, and funny! I fancied the arse of Harrison Ford. Karen Allen, tho – whatever happened to her? Didn’t she marry Harrison in real life and if not why not!

7. Another Country
This was the fictionalised account of Guy Burgess (Rupert Everett) who spied for the Russians and eventually defected there, looking back over his schooldays. The film covers some of his time at a brutal and bullying English public school in the 1930s as he falls in love with a classmate, played by Cary Elwes. Guy’s best friend is Tommy Judd (Colin Firth), another outsider – he’s a Marxist who later dies fighting in the Spanish civil war. My older sister and I watched it so many times we knew it off by heart. I’ve just rewatched it to review it, and was shocked at how much dialogue I remembered, especially as I can’t remember what I had for lunch today. “Tough as old boots Tommy was, until the bloody fascists got him.”

8. For Your Eyes Only
I cannot remember ANYTHING about this film and won’t have enjoyed it much anyway (hmmm, Roger Moore-era 007, I’m more of a Brosnan / Craig fan myself)  BUT I saw it with my dad on holiday in Lyme Regis in Dorset when it came out in 1981 and my dad NEVER took us to the cinema so in it goes (he died a few years ago). I do have Sheena Easton’s theme song in my Guilty Pleasures playlist on my iPod though, I like to pretend Prince wrote it for her.

9. Betty Blue
I LOVE Betty. As a French, brunette, eye-removing free spirit she couldn’t be more unlike me but everyone finds a bit of themselves in her. The ending is so sad. If it was made now the Daily Mail sidebar of shame would go crackers over her constant sideboob in those dungarees.

The first time I saw this, I’d been on a mammoth Christmas shopping trip with my friend (we’d put it all on credit cards as we were so skint. And actually most of the stuff we got was for us I think). She and I sat in the cinema surrounded by shopping bags then wished we’d bought nice hankies too as we were sobbing within about five minutes. Though I couldn’t risk my guardian angel showing me what life would be like if I hadn’t been born. Everyone would probably say “well, we were a lot thinner as there weren’t home-baked cakes everywhere, and we actually had a chance to speak more than once every five years when she pauses for breath”. Apparently Frank Capra screened this film for his family every Christmas which makes me want to cry all over again.

11. Skyfall
I saw this at the cinema with some friends having not been for YEARS because of babies and stuff. I used to be so into films (in my teens one of my fave things was reading Halliwell’s Film Guide, when I wasn’t fantasising about Tom Cruise in Risky Business. I was a bit weird though). Seeing Skyfall (which I thought was excellent, btw) on the big screen at our fantastic little local cinema (you can take WINE in!) was such a brilliant experience – it made me realise why I used to love film so much and made me do so again.

12. Some Like It Hot
Love Marilyn and love this film. She’s that perfect mix of unaware sexiness, vulnerability and humour.

A friend demanded I include this and I couldn’t believe I’d missed it off. It’s almost a perfect B movie – a silly plot, involving enormous tentacled and be-toothed worms (is be-toothed even a word? It is now); townspeople disappearing mysteriously; a small town, cut off from everywhere else; and great performances played straight (KEVIN BACON!!!!!) with no knowing winks to camera (rebuild that fourth wall folks, you know it makes sense!). The only B movie trope it doesn’t have is a head-in-the-sand Mayor up for re-election.

I am a complete wuss and have to watch scary films in daylight in small bitesize chunks but somehow I steeled myself a few years ago to watch this. Now I’ve seen it so many times, bizarrely it’s like a sort of comfort blanket that I put on when I want to watch something I know will be good, or I haven’t got the headspace to follow an unknown plot, or I just don’t want any nasty surprises (there’s lots of nastiness, but none of it is a surprise by now). Ripley totally gets to be mum. And Newt is amazing in this – quietly watchful and incredibly resourceful, staying alive until help (of a kind) arrives. I am not usually over-invested in films but when the rebooted Alien 3 arrives NEWT & RIPLEY & HICKS NEED TO BE A FAMILY!!!

15. Airplane
Oh. My. God. If you can’t already quote huge chunks of this film then go and watch it NOW. Then come back and tell me off for calling you Shirley. It ties for first place in any Most Quotable Film competition with…

16. Life of Brian
He’s not the Messiah, he’s a very naughty boy!