You are here: Home / Film Articles / RIP Michael Nyqvist – Or As I Like To Call Him, Viggo Tarasov 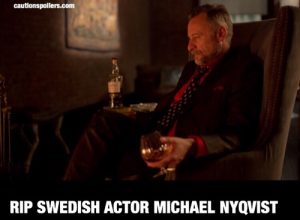 Swedish actor Michael Nyqvist has died aged 56, of lung cancer. He starred in The Girl With The Dragon Tattoo, Mission Impossible Ghost Protocol, and of course in John Wick.

His character, gangland boss Viggo Tarasov, was John Wick’s old boss and a man who seemed to straddle old and new Russia – and one of my favourite scenes is Viggo staring into the fire singing an old Russian folk song about the boogeyman as Wick gets ready to go into battle.

And of course its because of him that we found out about Wick’s infamous killing of three men in a bar “with a pencil. A FUCKING PENCIL.” Check out the boogeyman scene below.