You are here: Home / Film Articles / Once Upon A Time… In Hollywood: trailer & in-movie posters released 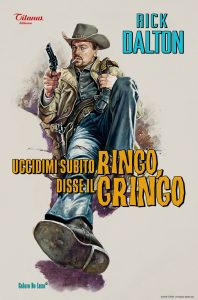 With Quentin Tarantino’s ninth film to premiere tonight at the Cannes Film Festival, they’ve released a new trailer, and four in-movie posters. Check them out below, along with the two posters that had already been released, featuring Margot Robbie and Brad Pitt / Leonardo DiCaprio.

The comedy-drama stars DiCaprio as actor Rick Dalton and Pitt as his stuntman Cliff Booth (if you haven’t seen the teaser trailer yet, it features a terrific fight between Booth and Bruce Lee, who is played by Mike Moh. You can watch it below the new trailer and the posters.)

The initial teaser signalled the light-hearted flavour of the film, and though the new trailer is also bouncy fun, it also introduces the Manson Family. (Pretty soon the reactions from Cannes will be coming in – it’ll be interesting to see how critics out there feel the two sides balance out.)

Directed and written by Tarantino, the ensemble film also stars Bruce Dern as George Spahn, who let Manson and his followers stay on his ranch; the late Luke Perry; Damian Lewis as Steve McQueen; and Dakota Fanning as Squeaky Fromme, one of the “Manson family”.

Once Upon A Time… In Hollywood: in-movie posters