The King, a Netflix Original Film starring Timothée Chalamet, will have its world premiere at the Venice Film Festival 2019.

It’s a new-look Henry V, his new look being Season 1 of The Black Adder, and so far we’ve got an image and a synopsis: 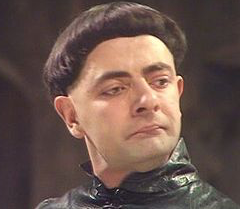 “Hal (Chalamet), wayward prince and reluctant heir to the English throne, has turned his back on royal life and is living among the people. But when his tyrannical father dies, Hal is crowned King Henry V and is forced to embrace the life he had previously tried to escape. Now the young king must navigate the palace politics, chaos and war his father left behind, and the emotional strings of his past life — including his relationship with his closest friend and mentor, the ageing alcoholic knight, John Falstaff (Joel Egerton).”

“Before Joel Edgerton and I embarked on a retelling of the story of Henry V, I never thought I’d find myself one day making a medieval movie. Swords and horses were never my thing. But the more we talked and the deeper I researched, the more excited I was by the idea of rendering the Middle Ages – its dirt, its brutality, its precariousness of life and death, its sheer other-worldliness – in a way that felt raw and human. 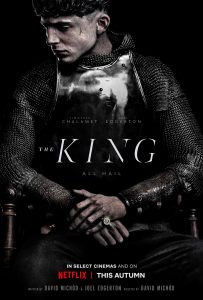 I wanted the kind of medieval movie I might make – one devoid of the nationalist bombast normally associated with the story of Henry V and one that might illuminate the ways in which war can emerge from the swamp of power and paranoia, greed and hubris, fear and family.”

It’s premiering at the Venice Film Festival, so I’m adding this to my list of movies I want to see, popping up at festivals I’m not going to be at – in fact I’ve just self-diagnosed myself with Permanent International Film FestivaL Envy, PIFFLE for short, as I feel my seething should have a decent acronym.

The King was co-written by Michôd and Edgerton, and co-stars Sean Harris, Ben Mendelsohn, Robert Pattinson, and Lily-Rose Depp.

Watch the trailer for The King:

Watch the teaser trailer for The King: