You are here: Home / Film Articles / 10 Movies to Watch on a Desert Island 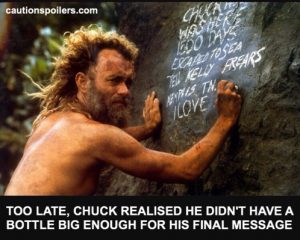 So if I was stuck on a desert island with only a solar DVD player for company and room for just TEN movies these are the ones I’d take and would happily watch again & again & again until Gerard Butler came to rescue me.

1. Prometheus – Being on a desert island at one with nature would be the ideal time to watch that giant Engineer sacrifice himself and his DNA for US! (That’s us as in all of us not U.S. as in just the United States). I love noble sacrifice in films even though the biggest thing I’ve ever sacrificed is the last tub of red wine gravy in Waitrose on Christmas Eve. Though in Prometheus there’s so much noble sacrificing going on they’re like lemmings. Ship’s captain Idris Elba also nobly sacrifices himself though not before he’s got the ship’s Christmas tree up thank god. And archaeologist Charlie Holloway sacrifices himself but he was dying anyway so, you know, no do-gooder points for him.

2. Cast Away – For tips in how to make my very own Wilson by drawing a face on a coconut. I’ll have to do another every few days as they’ll undoubtedly commit coconut hari-kari by smashing themselves on rocks to get away from my verbal diarrhoea.

3. Betty Blue – I’d probably stop before it got to the really depressing bit with the eyeball at the end but the sexy dungarees with nothing underneath and the shagging would cheer me up (I might even wear the sexy dungarees myself, On A Desert Island No One Can See Your Sideboob Not Even The Daily Mail Sidebar Of Shame).

4.  John Wick – Ok it’s not a very cheery film as his wife dies then someone kills his dog and steals his car (WHY do bad things always come in 3s? Always – I give you the “Look Who’s Talking” trilogy). But maybe it would help me realise things weren’t so bad after all? Daily gratitudes are important, Twitter tells me so.

5. Arrival – An amazing story about achieving world domination without killing anyone. No not the aliens, Amy Adams. It’s a brilliant film and one I’d happily rewatch on my island. Plus the sequel where some Geordies appear down south and red-headed Bianca from “Eastenders” has to translate their beermat stains as “Howay Pet!” And “Gan Canny Like!”

7. Naked Gun – This film is hilarious. Plus when Gerry finally FINALLY surfed into view to rescue me his first words could be “Nice beaver!” and I could say “F*** off you moron, there are no beauty salons for 1000 miles. Oh sorry, I mean Thanks! I just had it stuffed!

8. Interstellar – I love this film. A movie about space and time that finished in a bookcase. It wouldn’t have been the same if he found himself stuck in a kindle.

9. Monty Python’s Life of Brian – I know this pretty much off by heart which means I wouldn’t even have to pack the DVD, which means… space in the suitcase for my hair straighteners! I’ll just happily sit on the sand singing “Always Look on the Bright Side of Life” as the sharks swim closer.

10. The Great Escape – I’ve never actually seen this but I’m hoping it’ll give me some pointers should Gerry’s rescue mission fail.