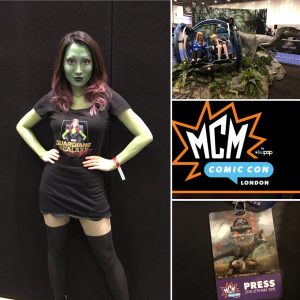 It was exhausting. It was fascinating. It was expensive. It was, on occasion, ever so slightly wiffy. And wow did I feel under-dressed. Next time I’m going as C-3P0 with a pull-along R2-D2 suitcase to fill with all those purchases I’m absolutely not going to make.

Thanks to a last-minute offer from Strike Media (thank you, guys!) I was given press tickets to MCM ComicCon London, which runs until Sunday 27 May 2018. 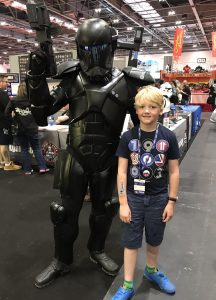 My mothering in my own mind

I went on the Friday, taking my 8 year old son, who had an INSET day (that’s a day’s holiday from school for the children. The teachers have training, while being accused of having a free shopping day by the world at large).

The two of us headed in to London on three trains, then across the capital on two Tubes, then onto the Docklands Light Railway. Luckily, folks, my 8 year old LOVES TRAINS.

The nearer we got to the ExCel centre, the more interesting our carriage became. Though admittedly when I first saw a man dressed as Goldilocks on the Bakerloo Line I simply put it down to Londoners’ unique sense of style. 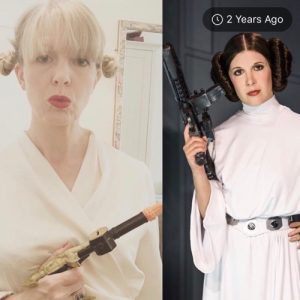 My last attempt at dress-up: I aimed for Leia, I ended up as Helga the East German spa worker

I too was dressed as a superhero, though I’m not sure anyone noticed.

No not The Vanisher from Deadpool 2. I was Super Mum, and my superpowers are having eyes in the back of my head and an invisible third arm for lugging back all the kids’ clobber from school.

(There are millions of us, and we exist among you, unnoticed, until we go away for one night and the whole house falls to shit.)

My 8 year old, who looks just like, well, an 8 year old, was actually No No Boy, a boy who for some reason doesn’t hear the word “NO”. Here are some of our highlights: 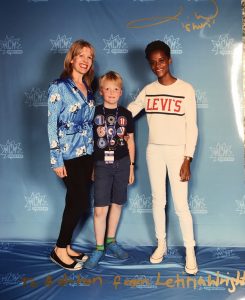 I’d booked and paid for two of these in advance: with Letitia Wright (Shuri the scientific princess from Black Panther) and Michael Biehn (Hicks from Aliens, man-who-worked-there-who-hadn’t-heard-of-Michael-Biehn-or-seen-Aliens when I asked him when the photoshoot was).

I could barely get through this last one, so traumatised am I still from those first scenes of Alien 3.

These photoshoots are pricy. In fact booking them online was the quickest £128 I’ve spent since my Christmas Eve trolley dash through Waitrose five minutes before closing.

But you get to put your arm round your heroes and heroines. 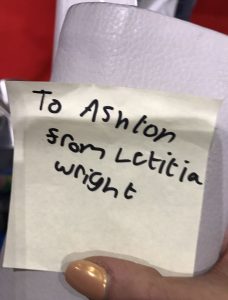 His message for the Black Panther actress to write on his pic. Next time I’ll give him more notice he’s about to meet a superstar…

Or in my case round my 8 year old son as he insisted on standing between me and Letitia Wright.

A brief pose, a quick word, a camera shot, then out of the booth. A minute or two later the photo appears out of a long line of printers.

He solved the rather noisy argument between me and my son as to whose name should be on the signed picture by doing an extra one for free. 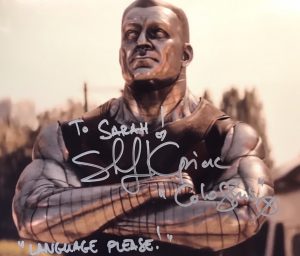 Letitia Wright was funny and charming, after we presented her with the Post-It note my son had scribbled in the queue.

Asked to note down a special message for Wright to write on his picture, the best he could come up with was:

To Ashton from Letitia Wright. 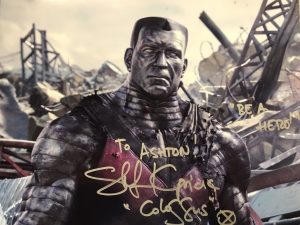 Who wouldn’t love to polish this man

SO MUCH TO BUY. Big stores for the major brands like Funko, lots of smaller stalls selling all sorts.

So many T-shirts with skulls on them. Lightsabers. Plastic daggers. Artwork. Clothes.

And memorabilia from every possible film, franchise and cult TV show. 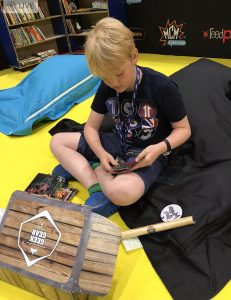 My arms are now a foot longer so yours don’t have to be. BUY LATER!

We liked the Geek Boxes on sale for £15, full of random geeky stuff, often from Harry Potter. I bought boxes for both my sons.

They loved them but don’t be a hero unless you’re a real superhero – buy them at the end so you don’t have to lug the sodding things round all day.

I also handed over all my worldly goods at Build-A-Bear: one Chewbacca and one Darth Vader, pricy but already much-loved.

Sadly I couldn’t find a Build-A-Bear John Wick teddy. Along with a giant umbrella for that stoic graveside scene, and a sad-eyed puppy with adorable floppy ears and a barking attachment which stops working after a couple of days. 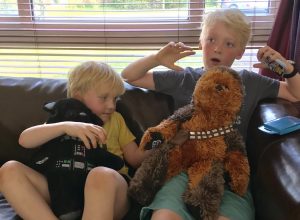 (Come to think of it John Wick is missing a lot of merchandise – having seen Deadpool 2′s Logan music box, featuring the dead X-Man empaled on a tree, I’d love a John Wick version like the ballerina box I had as a child: lined in black satin, with a mini Keanu Reeves revolving glumly to a Marilyn Manson tune).

These were some of the best fun and were free. Skyscraper, a film I wasn’t remotely interested in but am now, had a simple but effective background which in photos looks like you’re falling into an abyss. My 8 year old loved it. 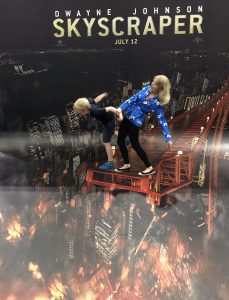 The Meg involved lying in an inflatable on a green floor, then being told to wave your limbs around – resulting in a mini movie where a giant shark comes out of the sea to eat you.

There was also a fun Jurassic World gyrosphere, with instructions not to touch the joystick as it kept coming off, which may or may not be a key plot device in the upcoming sequel; and a VR experience though that looked way too scary for me to attempt.

We went on a Friday so it wasn’t horrendously busy, with plenty of seating.

Eating next to Deadpool and Wolverine, or maybe it was just someone with impressive sideburns, I realised a lot of the cosplayers there probably couldn’t eat much because of their costumes, a bit like me with cups of tea when I’m wearing a jumpsuit in case I need the loo. 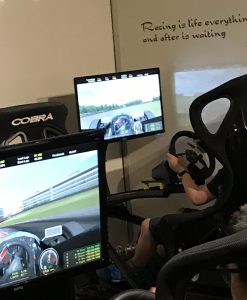 My son loved a driving experience. He was last on the leaderboard but I had to point out he is 8 and can still drive better than me (and thank you to Racing Aces for helping me out of a tight spot!).

So much! We were only there a few hours and missed the panels (I really wanted to go to the Letitia Wright panel but setting off after 9am for the off-peak travel card prices followed by a mid-journey train cancellation put a spanner in the works).

I’d have liked to have sat in on more of the Live Stage and discussions and other stage events too, restless 8 year olds permitting.

And we didn’t have time to get to the singalong screening of Moana which was a shame as How Far I’ll Go was a good description of our journey.

I wish we’d dressed up too. To be honest I’m never knowingly underdressed and my make up looks like Aunt Sally from Worzel Gummidge so I doubt anyone would have blinked an eyelid if I left home dressed as Cinderella’s fairy godmother.

To Plan Or Not To Plan? 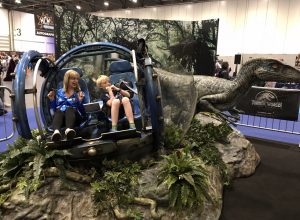 My son and a wrinkly old dinosaur, plus there’s a velociraptor in the background

For popular photoshoots you need to book ahead. For the autographs we just queued and paid on the day.

There is an MCM Comic Con app. I didn’t find it much use beforehand, though it really came into its own while there, with its Now & Next feature. The Map section still had “coming soon” even once the event was open.

I’d definitely take my 6 year old along in future, though I’d resist buying anything heavy until we were literally about to leave. 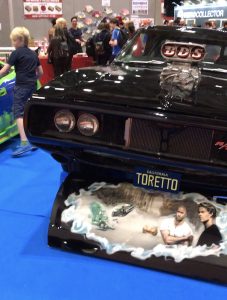 Can’t decide between this and a Fiat 500

Getting back across London on the tube this time with two bears, two heavy Geek Boxes, assorted *stuff* and a tired child who refused to carry anything could easily have been a nightmare.

Luckily we managed to get seats (possibly because some people’s outfits don’t really lend themselves to sitting), though I’d hesitate to risk it with two.

So next time I’ll take that pull-along case and chuck everything in: kids, purchases, Stefan Kapicik, the lot.