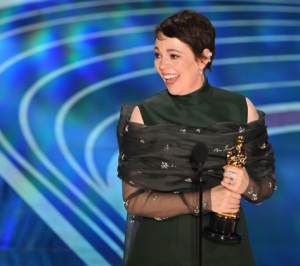 Olivia Colman accepting her Lead Actress Oscar for The Favourite, in which she played Queen Anne

The 2019 Oscars have been and gone, and as that red carpet is rolled up and put into storage along with a million filmmakers’ hopes and dreams, and probably the odd stray vol-au-vent, let’s look back at what happened on the night.

(By the way if you know me well and are therefore here for the dresses, what with there being no Keanu or Gerard Butler action at the ceremony, click down to my favourites.)

Colman’s performance as Queen Anne in The Favourite is blisteringly funny and very poignant. She also blew a raspberry – to wide applause – when asked to wrap up her speech and then carried on talking a good while longer.

Glenn Close had been widely tipped to win for her role in The Wife, and Colman paid tribute to the actress in her speech.

Despite the issues with Green Book, and my adoration of Richard E Grant, Mahershala Ali was a worthy winner of the Supporting Actor Oscar, after his breathtakingly elegant performance as concert pianist Dr Donald Shirley, who hires an Italian-American bouncer to drive him through the South for a series of classical concerts.

Check out his winner’s speech – it’s an elegant one too, particularly after quite a bruising awards season:

Grant may not have won the statuette but in many ways he won the season, his exuberant delight at being nominated regularly spilling out, topped by an Independent Spirit award the day before the Oscars which he dedicated to the generation of men wiped out by AIDS.

His performance as down-on-his-luck Brit Jack in Can You Ever Forgive Me, about literary letter forger Lee Israel, is a standout: hilarious, sad and with more layers than an onion. It also has that vegetable’s same effect on your tear ducts. (I don’t think I can push that metaphor any further, except to say I’ve been root-ing for him since Day 1, so we’ll leaf it there). Melissa McCarthy was also up for Best Actress for her role as Lee.

If you’ve been following him on social media recently you’ll also have seen a succession of photos, many of them extremely blurry, of Grant with his acting heroes and various A++++ megastars he’s met on red carpets and at pre-awards dinners and parties. I expect that now for many actors he will be the acting hero they want a photo with.

I wonder if part of the reason he’s been such a hit is that the Oscar run-up has been a disaster, with the Academy first saying it was going to relegate some awards to the commercial breaks, then changing its mind after a huge backlash from filmmakers.

This year the ceremony was also hostless, after Kevin Hart had to relinquish the role when old homophobic tweets came to light and he at first refused to apologise. 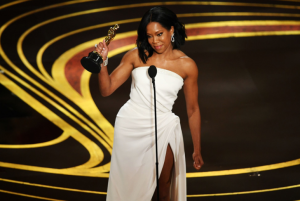 The Supporting Actress Oscar went to Regina King for If Beale Street Could Talk. The movie is based on James Baldwin’s book and was written and directed by Barry Jenkins. King plays Sharon, mother of Tish, a young woman trying to clear the name of her wrongly-accused boyfriend Fonny before the birth of their baby.

Best Picture went to Green Book which has led to annoyance and sighs across the film world; the lead performances are excellent but while it’s a good film it’s not an amazing one, and its treatment of race is old-fashioned and white-centred (I gave it 3/5). The film also won for Original Screenplay (it was co-written by Nick Vallelonga, son of Tony Vallelonga who’s portrayed in the film by Lead Actor nominee Viggo Mortensen).

Rami Malek won the Lead Actor award for Bohemian Rhapsody then promptly fell off the Oscar stage. I thought he was terrific as Freddie Mercury, though the film isn’t amazing. It is great fun though, and a real crowd-pleaser. I was ear-wigging on people’s reactions as I came out of the cinema, and everyone from our sold-out showing, from teens to 60 years olds, was raving about it.

Malek has, by all accounts, been an assiduous promoter of the film during awards season, though he’s also been criticised for steering clear of the “Bryan Singer issue”. Singer was the film’s director but has been accused of very serious sexual assaults, and was sacked during the production – his role taken over by Dexter Fletcher (because of *rules* Fletcher doesn’t get a director credit on the movie). 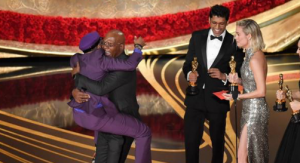 The film is based on the true story of Ron Stallworth, a black policeman who infiltrated the KKK in the 1970s. (Check out my 4-star review – it’s a very funny, very sharp and very shocking film).

Watch Spike Lee’s speech now (finishing, after talking about the 2020 US election, with “Let’s do the right thing – you know I had to get that in there!”) :

I finally, finally watched Roma yesterday, just before the Oscars ceremony started (did you know it was amazing? I gave it 4.5/5 stars!) Director Alfonso Cuarón had a very good night. Although he didn’t pull off the double of Best Foreign Language Film and Best Film, he did take home the Oscars for Director, Cinematography, and Foreign Language Film. (Roma is available to watch on Netflix if you haven’t seen it yet.)

Here’s what he had to say when he went up to accept the Oscar for Best Director:

Best Animated Film went to Spider-Man: Into The Spider-Verse which I haven’t seen yet but have only heard absolutely amazing things about. One for me to take the children to when it next pops up at our local cinema’s Saturday Kids’ Club. 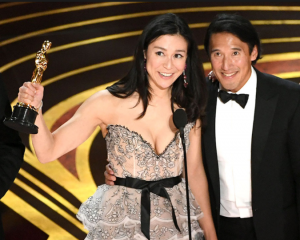 The Documentary Feature Oscar went to Jimmy Chin and Elizabeth Chai Vasarhelyi for the nerve-shredding Free Solo about free climber Alex Honnold – yes he really does climb without ANY ropes at all.

It’s a fantastic film and Honnold is an extraordinary subject, but it’s also utterly terrifying especially if you’re scared of heights.

The Wakanda world they built, and the costumes they created, were awe-inspiring, and that’s before we even get to the film’s power in terms of visibility on screen and also behind it. I can’t think of better winners, and on a truly genre-busting movie. (Black Panther was also up for Best Film.)

Vice won Hair and Make Up Design – an unsurprising win considering Christian Bale’s extraordinary transformation into Dick Cheney. Maybe he can play a reasonably slim, bearded 40-something man from now on and give his body a bit of a break. (Also where’s my award, I’ve lost and put on weight way more times than Bale over the last 20 years.)

The Animated Short Oscar went to Bao by Domee Shi – this was the brilliant little film that played before Incredibles 2 in cinemas, about a dumpling that comes to life. Domee Shi is the first woman to direct a Pixar short film; she shared the award with producer Becky Neiman-Cobb.

Shallow from A Star is Born picked up the statuette for Best Song (I’m not particularly musical and even I downloaded that one). A Star Is Born seems to have run out of steam during awards season, and it hasn’t stayed with me in the way some of the others have (eg The Favourite,  Free Solo,Can You Ever Forgive Me and – I expect, anyway – Roma).

Here’s the full list of 2019 Oscar winners and nominees